Food: It’s Something More Than You Eat!

Sea Urchins are another snack found at Beijing, China’s Donghuamen Night Market. Do you think the Calabrians in The Inheritance would have liked them?

What comes to mind when you hear Crepe au fromage, Quiche Lorraine and Clafoutis?

Who would you associate with cheese crepes, a fancy tart and a rich cherry dessert?

a). France or Italy

b). French culture or Italian culture

Food is one of the many tools a writer uses to help create an authentic sense of time and place in a novel. The Inheritance is set in Calabria, southern Italy during 1897 to 1913 and, in order to realistically depict society, details of everyday life had to be accurate.

Would you choose mushrooms or plantain?

Bruno is the Villa San Michelle’s cook. In Chapter Two, he prepares lunch for Santo Marino. Which meal would be most appropriate?

The eggplant dish is the obvious choice. The Cuban meal would not be consistent with the world of The Inheritance. Eggplant, however, is a staple of the Calabrian diet and including this dish helps bring the setting to life for the reader.

What dessert would be best suited to The Inheritance?

a). atroprllado matancero, fresh pineapple and coconut glazed in syrup

a). This pineapple dessert is a traditional sugary Cuban treat but it would be out of place in The Inheritance.

b). Figs grow well in Calabria’s poor soil and rocky areas and can withstand the region’s hot dry sun. Chocolate-covered figs are a popular candied version and Bruno’s yen for them in Chapter Three fits the novel.

c). Aniseed is a licorice-tasting spice in Calabrian deserts and Bruno wants to bake buccallato for Anna Marino in Chapter Two. The cake, however, is a traditional Tuscan dessert and, at first glance, might seem misplaced. Anna, however, was born in Tuscany and lived there before she married her husband, Santo. Her cook made the cake for her when she was a young girl and baking buccallato shows Bruno’s affection for Anna. The cake also references an earlier period of Anna’s life that is key to understanding her current dilemma.

In The Inheritance, food is more than something you eat. The story takes place over one-hundred years ago and many tools were used to construct a realistic setting to make it believable. Every detail in the novel contributes to the big picture. There is nothing random or unplanned and even something as small as a chocolate-covered fig plays a significant role.

What foods do you associate with your travels? I’d welcome your comments.

I invite you to look at my photographs.

The Mercato di Capo in Palermo, Sicily had lots of fresh fruit but my husband couldn’t find any chocolate-covered figs.

The Donghuamen Night Market in Beijing, China was a completely different food experience compared to the Mercato di Capo in Palermo, Sicily. 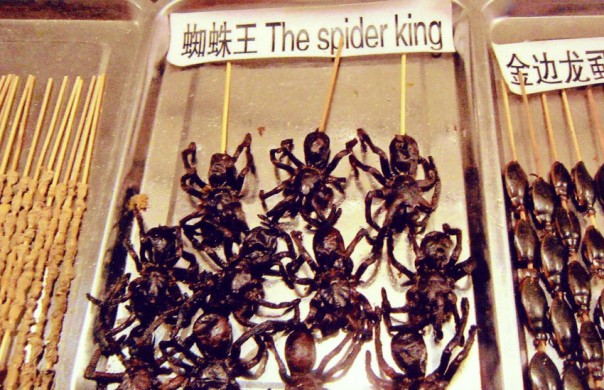 The Spider King is a popular snack at Beijing, China’s Donghuamen Night Market and a scene with people eating them would add authenticity to a book set in this city.