Book Review: The Woman In Cabin 10 by Ruth Ware

Did Laura (Lo) Blackstock witness a woman’s body being thrown overboard in the cabin next to hers? Had she too much alcohol to drink at the reception and her recollection, therefore, suspect or given a history of anxiety issues, this a hallucination? A travel journalist based in North London, England, Lo accepts an assignment on the maiden voyage of the Aurora Borealis, a ten-cabin luxury liner on a week-long cruise of the Norwegian fjords and Swedish archipelago islands. Prior to this, however, she is burglarized. Traumatized by the break-in plus troubled over a conflicted relationship with her boyfriend, Judah Lewis, a foreign correspondent, Ruth Ware challenges us from the start. Can we trust Lo?

The Woman In Cabin 10 begins with a harrowing Prologue. It has thirty-seven chapters divided into eight parts that focus on pivotal events. The author uses email messages, Facebook comments, website forums and news sites plus news articles to tell her story. These varied techniques quicken the intriguing plot.

The 10-cabin ship cruises the Norwegian fjords with Trondheim and Bergen, scheduled stops.

The novel is rife with twists and turns. Does the woman in cabin 10 really exist? Is the owner of the vessel and his crew involved in a cover-up? Wouldn’t a murder threaten the ship’s future and employment of all concerned?

If a murder is proven, how will the issue of international waters impact the crime? This Chapter 20 excerpt from the conversation between Lo and Lord Richard Bullmer, director of the Northern Lights Company which owns the Aurora speaks to the situation.

“The Norwegian police may not be able to act if the incident took place in British or international waters-it’s a question of legal jurisdiction, you understand, not their willingness to investigate. It will all depend.”

Lo encounters mostly non-existent internet signal on board and, therefore, is unable to contact the police or Judah for help. Is this real or purposed? 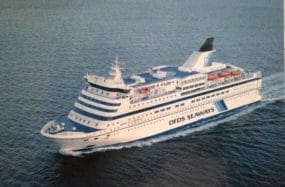 Ware populates her novel with eclectic characters: financiers, ex-model, travel expert, photographer, etc. One male had a complicated relationship with Lo in the past. Are these people who they present themselves to be?

Ware excels at describing the “gobsmacking interior” of the boutique ship. I cite this example from Chapter 5:

“That one chandelier has more than two thousand Swarovski crystals.”

She presents the turbulent sea as a metaphor for Lo’s confusion as the following Chapter 19 excerpt shows:

“I watched the sea rise and fall outside the window, its ceaseless movement echoing the restless thoughts that were running around inside my head.”

The wife of the Aurora’s owner, a wealthy heiress, suffers from cancer. Ware deftly captures the scourge of this disease in this Chapter 10 excerpt:

“To see someone like Anna Bullmer, so privileges, with every advantage that money could buy-the latest medicine, the best doctors and treatments available-to see her fighting for her life like this, before our very eyes, was almost unbearable.”

The concluding chapters are a bit of a stretch with respect what happens to Lo and the ultimate resolution. Nevertheless, Ruth Ware pens an exciting mystery that is a goodread.