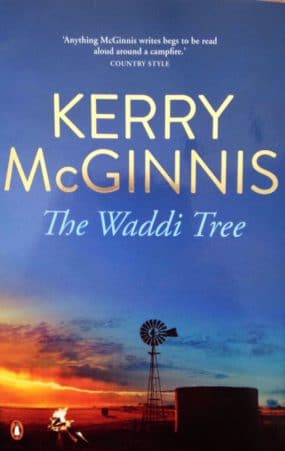 The Waddi Tree by Kerry McGinnis

I purchased The Waddi Tree by Kerry McGinnis in 2015 in the Alice Springs Airport while awaiting a flight to Sydney, Australia. Alice Springs is a town of about 25,000 in central Australia situated in the Northern Territory; the Simpson Desert is to the southeast. My husband and I had gone to Ayers Rock (Uluru) for a few days prior to view the mythological sandstone rock at sunrise and sunset. Ayers Rock is approximately 280 miles southwest of Alice Springs and we’d ridden a bus for seven hours on the Lasseter and Stuart Highways to get here.

Travelling awards us insight but there is insufficient time when one is visiting a place to fully appreciate its uniqueness and I always hunt for books that can teach me more. Kerry McGinnis is Australian born and she and her family owned a cattle station in central Australia. As such, I believed The Waddi Tree a worthwhile read.

The story commences in 1957. For the past decade, Sandy McAllister has run the struggling Arcadia Cattle Station; a homemade three-room house and shed on leasehold property in central Australia. His younger brother, Rob, manages Kharko Station; a prosperous operation with a homestead and complex of buildings likened to a town. Sandy, a fifty-year-old army vet, is hard-working, devoted to his vibrant wife, a former nurse, Jenny and adventuresome with their child, a ten-year-old named Jim. By comparison, Rob is regimented and taciturn. His wife, Mary, was once full of laughter; the drowning of their son, Todd, fifteen years ago, however, has rendered her pale and subdued. Their nine-year old daughter, Rosemary is rebellious whereas Oliver, her fourteen-year-old sibling, has resigned to the fact he must follow his father’s footsteps. Though only forty miles separates the stations, the brother’s conflicting personalities has limited and strained their contact; nevertheless, Sandy emphasizes to Jim, Rob is his only uncle.

The primary setting of this book is the Northern Territory, Central Australia.

McGinnis vividly depicts daily life on the isolated stations by referencing radio communications, Jim’s daily half-hour school lessons with an unseen teacher in Alice Springs through the School of the Air program and The Flying Doctor’s visit with a nurse to Kharko Station for monthly clinics. Jim works to help his parents sustain Arcadia. His chores include herding goats but he romps with his aboriginal buddy, Nipper. He and his mother enjoy Sandy’s accordion playing but after her accidental death, his father unravels, this chapter closes and he is sent to live with Rob’s family.

Sandy ultimately abandons Arcadia Station, becomes an itinerant worker, begins a slow descent into alcoholism and contravenes social mores by partnering with an Aboriginal woman and fathering a child named Eddy. He evolves into an object of derision and becomes estranged from Jim. In Chapter Five when Sandy is about to leave Jim with a promise to return in a year, he says, ‘You’ll understand when you’re older son.’ The quote underscores Jim’s odyssey that represents the thread of the book.

Located in the Northern Territory, this station is approximately one million acres in size and home to about 4,500 cattle.

The story explores Jim’s struggle to comprehend all that has happened as he transitions from boy to man. He fights to escape the shadow of his father, cope with the grief of his mother’s loss and earn worth based on his own merits rather than accepting anything subscribed to him for being Rob’s nephew. As he tries to find his place at Kharko Station, a microcosm for the world, he assumes more responsibility and his interactions with characters and responses to events illustrate his attempts to reconcile issues of loss, anger, hurt and shame. Through his experiences, he comes to understand “family” has more than a single definition and love, many dynamics. In particular, Jim’s interaction with the spirited Rosemary and observation of Oliver’s defeatist attitude lead him to contemplate his own options.

Of note are his relationships with secondary characters, especially the cook, Pommy John and racehorse jockey, Barney O’Dowd. Through conversations and incidents, the reader is informed of the immensity of cattle stations in central Australia. There are numerous hands and property allocated covers vast tracts of land. Branding cattle is an onerous chore and ensuring herds have steady access to water demands a relentless cycle of moving the animals. In addition, these characters serve as vehicles to reveal attitudes towards black workers, white-black coupling and half-caste children. They also represent forums within which Jim debates matters of conscience, tests new skills and exhibits growing competence on the station.

The blistering-hot and furnace-dry desert environment of central Australia is a metaphor for the bleakness Jim confronts as he passes through adolescence. McGinnis’ descriptive passages of the ochre mountains, red sand dunes, spiky spinifex ridges and pale trunked gum trees are superb and message us of the beauty that exists within this stark land. Her references to drought and the construction of bores to tap groundwater from shallow aquifers for the cattle mirror the barrenness of Jim’s relationship with his father plus hint at the hope of salvation. The inclusion of wildlife such as emus, euros, brumby feral horses and the second largest lizard in the world, a perenti, highlight Australia’s uniqueness. Animals also interject humour and frame valuable lessons: Jake, Jim’s quirky bay pony; Peddler, a brown Arcadia Station packhorse; and Pearlshell, the red bay present from Rob for his sixteenth birthday.

The novel was poignant but McGinniss’ exploration of so many emotional issues caused some to be left thin and, as a result, I felt residual incompletion at the end. Jim’s visiting his father’s grave and his grasp of the anguish he’d suffered over his mother’s death, however, was gratifying. His learning he’d hung on to Arcadia Station, willed it to him and realization he’d never truly been abandoned was also gratifying.

McGinnis is deft with words as exemplified by her phrasing of this coming-of-age moment in Chapter Sixteen. ‘When she (his mother, Jenny) died it was as if a fire had gone out in Sandy. Jim could still recall the light in his father’s eyes as they rested on Jenny, and suddenly he understood what a burden life must have become for him once she was gone.’ Jim’s commitment to restore Arcadia Station and make it home brought full circle to the novel. I did regard his decision to assume care of his half-brother, Eddy and assumption a teacher, Ruth Petlow, with whom he’d developed a minimal relationship rather simplistic and, perhaps, a rushed attempt by McGinniss to conclude the book.

Titles bear symbolism and a waddi tree is mentioned in Chapter One. It is a desert acacia tree Sandy insisted never be cut that shaded the eastern side of the veranda fronting their home. When Jim returns to Arcadia Station in the final chapter, its condition is dilapidated but the tree has survived and, hence, harbingers a positive future.

In conclusion, I’d like to tribute McGinnis’ skilful use of vocabulary in authenticating Australia and cite examples: swag, a term for pack; strapper, someone who cares for horses and tuckerbox, a lunch pail. On a final note, The Waddi Tree was definitely a worthwhile read. It enhanced my understanding of the Northern Territory and will hold a valuable place in my travel library.

As to a jackeroo, it is a cattle station employee being trained for management; a position for which Jim is qualified when he decides to assume ownership of Arcadia Station.