Why People Do Horrible Things

The Ex begins June 17, 2015 three years after Molly Harris’ murder. It opens post the football field incident with a transcript of a recorded interview between NYPD Detective Jimmy Boyle and Jack Harris at a New York precinct. The tale then backtracks the month with the last of its twenty-four chapters taking place four years later on August 10th.
Alafair Burke pulls us into the drama by paralleling the Penn Station Massacre to horrors impacting previous generations that have forever changed us. This excerpt is from Chapter Three.

“Every generation of American’s had at least one day where they all could remember where they were when they heard the news. Pearl Harbour. The Kennedy assassination. Nine-eleven.

And then there were some dates that left the same kind of mark, but in a smaller and more regional way. Columbine in Colorado….A club fire in Rhode Island.”

Scales of Justice is a symbol of law and the author served as the Multnomah County Deputy District Attorney in Portland, Oregon.

As a result, Burke makes the triggering event relevant to each and every reader; a brilliant tool that breathes the fictional world to life.

The Ex rivets with twists and turns. Assumptions emerge erroneous, motivations surface false and whom we judge victim and culprit change. In addition to narration and dialogue, it unfolds through itemized lists, email exchanges, text messages, newspaper articles and interview transcripts; a clever mode of delivery that quickens the pace.

As well as an intriguing who dunnit, Burke engages us with an eclectic cast including: Jimmy Boyle, an Irish NYPD detective with a photographic memory; Don Ellison, Olivia’s law partner and “honorary dad;” and Charlotte Caperton, Jack and Olivia’s lesbian friend who operates a gossip website central to the plot.

The characters in The Ex are multi-dimensional. They have virtues and shortcomings with intentions both self-serving and altruistic. There are snippets of them in us bonding reader and story in a poignant manner. To achieve this dynamic, Burke sketches descriptions, draws visuals and sums vital information that provides insight into what has happened. The following are such examples:

In Chapter Three, she says of Todd Neeley, “Just a boy, 15 years old, all of five feet seven and 127 pounds.”
With respect to Jack Harris, she states in Chapter Four, “He was the poster child for hard knocks.”
The protagonist, Olivia Randall, deserves consideration. The daughter of an alcoholic abusive father and emotionally distant mother, she manifests a self-destructive streak, unsavoury record with males and a tempestuous relationship with Jack twenty years ago that had included an affair with his now-dead brother, Owen. 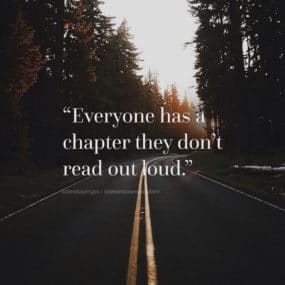 The main character, Olivia Randall, regrets incidents of her past, which this quote symbolizes.

Olivia’s self-analysis in Chapter Six shows blunt awareness of her imperfections. She says, “I’m not good at everything. Or, to be more honest. I’m pretty bad on some fairly major metrics. I’m selfish. I feel entitled to things always going my way. I despise hearing about other people’s problems, because I don’t like most people, especially people who would be described as normal….”

Notwithstanding this criticism, however, she shows confidence and conviction in her abilities. Humans are creatures of contradictions; a dichotomy Burke captures well. Olivia’s quote from above continues and she says, “I am extremely good at one thing, though. I am good at tearing apart a prosecution….”

Given what we know about Olivia’s history, the reader empathizes with and roots for her while at the same time, vents frustration and anger at her choices. Burke has created a flawed and complex woman we can neither ignore or treat with indifference or, most likely, forget. She deserves kudos for this, too.

The legal process is integral to the framework within which The Ex is told and an offshoot of Burke’s experience as a Deputy District Attorney and professor of law. As per Chapter Seventeen, “The march towards a criminal trial is slow but never steady-fast and frenetic at the beginning, followed by a long period that would feel almost normal if not for the pending changes, followed by the ramp-up toward trial.”

A mother’s murder and the impact of its loss on her husband and daughter is core to this novel.

An explanation of computer spying methods, the parlay of technical terms, the definition and relevance of GSR (Gun Shot Residue), the meaning of Brady material and the rules of discovery add gravitas to the novel plus authenticity as to the conflict’s resolution.

The conclusion is surprising albeit plausible but, that being said, Olivia’s predicament appears a bit of a stretch. Olivia’s quote in this part re defending Jack in Chapter Twenty posits reflection. She says, “Like every circumstantial case, every piece of evidence had two sides.” This prompts one to ponder the ministering of justice, I’m certain.

In the final pages of The Ex, Olivia says, “When you’re a criminal defense lawyer, you get used to trying to understand

why people do horrible things.” Sans disclosing Jack Harris’ fate, the significance of her words is clear. Whoever was responsible for the three football field murders, the reader will understand why they did a horrible thing. And sadly, this awareness will also reveal more victims than those who lost their life.