How Many Families Do You Have?

Lion, previously published as A Long Way Home, is Saroo Brierley’s memoir. Saroo was born in 1981 in Ganesh Tilai, Madhya Pradesh, India. In 1986 while accompanying his older brother, Guddu on the train south to Burhanpur, the two became separated. Trapped in an empty rail car, Saroo wakes up at Howrah Station, Kolkata, later revealed approximately 1,500 kilometres east of his home. Adopted by an Australian couple, Sue and John Brierley, in 1987, he is raised in Hobart, Tasmania, Australia.

Years later when an adult, he searches for his birth family utilizing Google Earth’s satellite images. A Facebook group also provides assistance. With only his memories to guide him and wrongly believing the name of his hometown, “Ginestlay,” it is a painstaking process. 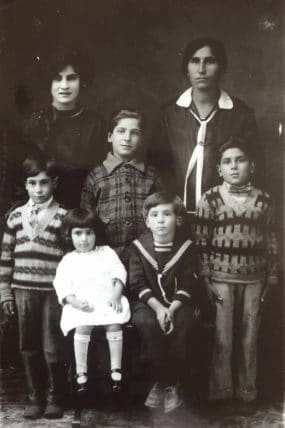 This novel explores family and this is a cherished 1926 photo of the Perri-Perry family.

His efforts showcase technology’s capabilities as well as Saroo’s commitment to achieve his goal. In 2012, he is reunited with his mother and siblings but learns Guddu dead. His birth and adoptive mothers eventually meet and though Saroo returns to Hobart, he maintains close ties with his Indian family.

Brierley begins his account with a Prologue set in India at the point he and his mother on the cusp of reunion. From there, thirteen chapters headed with titles intrinsic to theme chronicle his journey. An Epilogue speaks to the subject of family and how this experience has changed Saroo. A compilation of original photos and documents plus a detailed map of India provide visual aids.

The author conveys the harsh living conditions Saroo and his family endured in India to help readers envision the world from which he came. This excerpt from Chapter Two is particularly poignant.

“Hunger limits you because you are constantly thinking about getting food, keeping the food if you do get your hands on some, and not knowing when you are going to eat next. It is a vicious cycle….Hunger and poverty steal your childhood and take away your innocence and sense of security.”

There are many passages recording Saroo’s harrowing predicament with this sample from Chapter Two conveying his desperation.

Technology helps Saroo find his birth family. This is a 1968 letter to my grandfather in Canada from relatives in the Italian village he’d left 60 years prior.

“I can still feel the icy chill of panic that hit me when I realized that I was trapped….I couldn’t read any of the signs in the carriage….I called for my mother,…No one answered and the train didn’t stop….I was lost.”

Chapter Thirteen is noteworthy for its reference to modes of transportation in India. Brierley’s description of the rail system and his journey from Burhanpur to Kolkata as an adult is comprehensive and clear.

Though this is Brierley’s memoir, sayings threaded throughout address universal issues and, as such, make his tale relevant to all. This Hindu quote from Chapter Twelve sparks contemplation. “Everything is written”: destiny takes its inevitable path.”

With regards the meaning of the title, Lion, Brierley informs us in Chapter Eleven that he was christened, Sheru Munshi Khan. Sheru is Hindi for “Lion” but he’d mispronounced it since lost and would be forever known as “Saroo.”

Saroo searches for his birth family in India.

His birth mother, Kamla meets Sue Brierley face to face in Ganesh Talai; an incident reported in The Epilogue. Saroo’s reflection in the final pages sums his resolution of reconnecting with his birth family.

“I now have two families, not two identities. I am Saroo Brierley.”

Lion or A Long Way Home is an inspirational story of obstacles conquered, dreams realized and insights gained. A marvellous read for sure.