Approximately 6500 kilometres long, the Amazon River system in South America has the largest drainage area in the world.

The places cited in this blog are located in Brazil and within the Amazon River basin.

Manaus, Brazil is the largest city on the Amazon River. On the northern bank of the Rio Negro in the middle of the Amazon rainforest, it is 1500 kilometres inland from the Atlantic Ocean. Founded in 1669 and a center of the rubber boom, it has a population of approximately two million people. Access is by boat or airplane.

Construction of the 670- seat Manaus Opera House began in 1882. Steamships from Europe brought almost everything utilized in its building such as crystal chandeliers from France and marble columns, Italy. The first performance was held in 1896 and it is operational today.

Santarem, Brazil, a river port of approximately 350,000 people, has a rich past in the rubber industry. It is famous for “The Meetings of the Waters” where the blue Rio Tapajos flows side by side the muddy Amazon River.

Parintins, Brazil is situated on the right bank of the Island of Tupinambarana. With a population of 71,000, the three-day June Boi Bumba Folkoric Festival is the second largest after Rio’s Carnival.

The village of Boca da Valeria with a population of around 100 is situated at the mouth of the Valeria River between Santarem and Parintins. There is a school, chapel, café/bar and homes on stilts there. I took the lead photo of the children when visiting the settlement.

Alter do Chao is a Brazilian resort about 33 kilometres west of Santarem on the right bank of the Rio Tapajos. The “Island of Love” famous for its white sandy beach is in front of the town.

Photos from my Amazon River adventure. I welcome your comments. 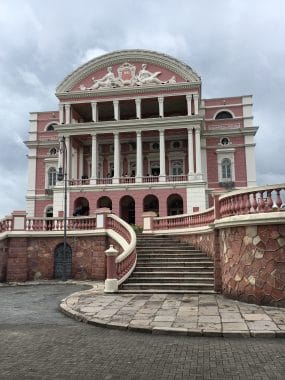 “The Meetings of the Waters” in Santarem, Brazil.

Island of Love Resort, Alter do Chao, near Santarem, Brazil.