On April 16, 2015 Marianne had an interview with the author of Book Babe. bookbabe.blogspot.ca 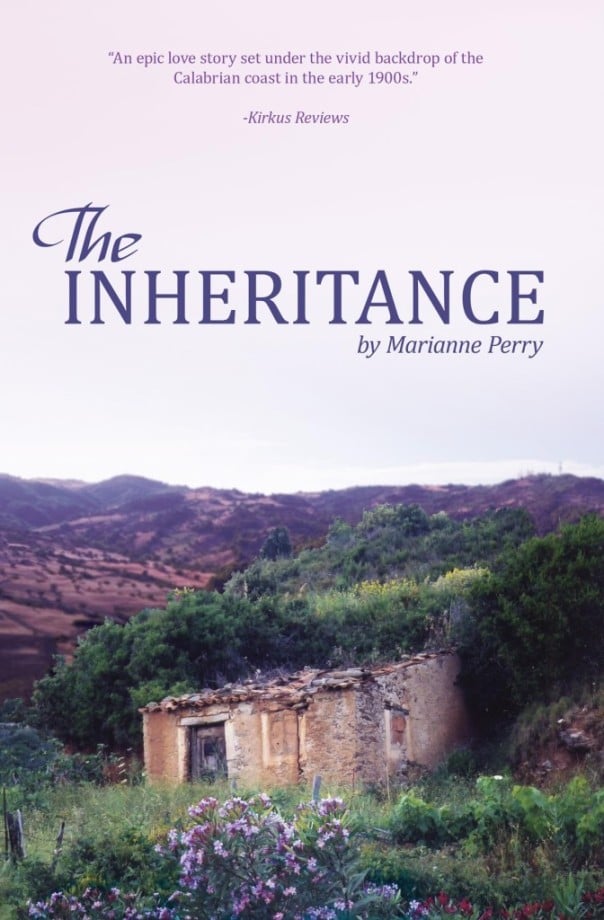 The Inheritance tells the story of a family disintegrating from conflicting loyalties in Calabria, southern Italy. Set during the period 1897 to 1913, the region was subject to earthquakes and tsunamis; the land was harsh and poverty the norm. Superstition clashed with religion and a class system ruled the people. Calabria is the perfect backdrop for the tragedy that unfolds in The Inheritance.

Caterina is an atypical woman, and The Inheritance chronicles her life from birth to young womanhood. Born with an inheritance of loss into a society that has predetermined what she can and cannot do, she vows to live a life of her choosing. Caterina refuses to allow the limits of her gender, the constraints of her class and the demands imposed by those in power to stand in her way. Caterina remains steadfast in her commitment to become the woman she imagines. Her decisions ignite conflicts and fuel a chain of events that result in dire consequences for all whose path she crosses.

Welcome. You’re here to promote The Inheritance, a historical fiction/romance. Tell me, please, what was the inspiration behind this story? How did it come to you?

A mysterious woman inspired me to write The Inheritance, of course!

My Italian-born grandmother, Nana Caterina was the matriarch of our large family. She left her family behind in a mountain village in Calabria, southern Italy in 1913 when a young woman, travelled in steerage on a steamship across the Atlantic Ocean, landed at Ellis Island, New York and eventually settled in Northern Ontario, Canada where she met and married my grandfather, a fellow Calabrian immigrant. They raised nine children that included my late father and despite an imposing presence; her early life in Italy was shrouded in mystery. As time passed, I became intrigued about her past. She never returned home or saw her parents again and I wanted to find out why! As a result, I began genealogical research, which included obtaining original Italian documents and travelling to Calabria where I visited the mountain village of her birth. In the end, I solved the mystery and though The Inheritance is a work of fiction, its story emerged from my discoveries about Caterina and her probable living conditions during her years in southern Italy.

We focus a lot on heroines here on Book Babe. Tell me what makes your heroine(s) strong.

Strength adopts many forms and acquiescence is not necessarily synonymous with defeat or silence, with agreement. Caterina is a complex character whose strength manifests in many ways.

For example, Caterina endures tragic personal loss whilst a child yet she retains the capacity to love Lorenzo with unbridled passion and rather than losing herself to him, insists he meet her terms. Though her love for Lorenzo is intense, she does not neglect her girlfriend, Francesca and, instead, demands they help resolve her problems and include her in the new life they’ve planned. As a peasant woman, Caterina opposes stereotypical attitudes, conventional norms and restrictive class structures. In particular, she battles the religious beliefs of the local priest, Padre Valentine for whom she has great respect. Her refusal to concede her opinion and denigrate his, however, honours her character and respects the integrity of their relationship.

Caterina’s determination to live a life of her choosing forces her to maintain a sharp focus and make tough decisions. Her steely persona, however, does not stifle her gentleness towards little children, pale her affection for her pet wolf “Shadow” or lessen her devotion to caring for the affirmed Anna Marino.

Do you see any of yourself in her?

San Michelle Estate is owned by Santo and Anna Marino and Caterina’s family are peasants living on an enclave who work for them. Anna becomes ill and over the course of the novel, Caterina becomes her devoted care-giver. They form a deep bond and Anna gives her a cameo brooch to symbolize her love for Caterina.

My ninety-year old mother has had many health issues and along with my late father, I have always had a responsibility for her care. In particular, she’s suffered from dementia for a long time and after my father was diagnosed with cancer, I quit work to be by his side and look after her. When he passed away, she moved into a longterm care facility. I never returned to work and, with my husband’s support, decided to focus on writing and continue to care for her. My mother inherited an antique cameo brooch from her Sicilian-Italian born father, which she has given it to me. It is amongst my most cherished inheritances.

My devotion to my mother and the cameo brooch, therefore, are reflected in Caterina’s relationship with Anna Marino.

Was there any particular part of this story that was the hardest for you to write? Tell me why.

I live in the country on Lake Superior in Northern Ontario, Canada and revere nature and respect wildlife. Wolves are my favourite animal and I have seen one on our property. They are intelligent, family-oriented and often misunderstood.

A wolf named “Shadow” is integral to The Inheritance. Wolves are endemic to the area in Calabria, southern Italy where the story is set and, hence, Shadow adds an element of realism to the novel. In addition, Shadow helps develop character, illustrate relationships plus injects humour to balance the tragedy in this tale. Without giving away too much, suffice it to say the conclusion with which he meets though intrinsic to the conflict that drives the plot was painful to write.

What kind of research did you do when you penned this novel? Did anything surprising come up in your search?

In order to correctly depict society during the 1897 to 1913 period during which The Inheritance unfolds, I studied the history and geography of Calabria, southern Italy.

Caterina, the heroine, ages from birth to sixteen in the story and I researched my paternal ancestry with emphasis on my Nana Caterina’s life prior to her 1913 North American immigration to understand what she might have experienced.

Names are critical to establishing authenticity in historical fiction and I picked those such as Mafalda, Fiore and Elda for minor characters from Italian genealogical documents of the late 19th and early 20th century.

Place description is also vital to bringing the past alive for readers and my travel to Calabria and exploration of the actual places where The Inheritance is set helped me achieve this.

While conducting genealogical research in preparation for writing The Inheritance, I unearthed a century old land deed for a mysterious piece of property in Calabria no one in my family remembered that had originally belonged to my great-grandparents. Its presence haunted me and I am currently writing another book that stems from the implications of this discovery.

What would you like readers to gain from reading your book? Is there a strong moral? Do you hope they will laugh, learn something about a particular subject/person, ponder a point?

The Inheritance is set in Calabria, a region in southern Italy not as frequented by tourists as Tuscany for example. I hope some readers may decide to travel there and have featured a map for introductory purposes.

I also took the photograph of the crumbling stone cottage on the cover of the book whilst travelling through Calabria. It symbolizes my Nana Caterina’s early life there, is intrinsic to the story plus showcases the area’s lush lavender shrubs and rugged mountain terrain.

While researching my Nana Caterina’s early life, I discovered most families have unsolved mysteries and I’ve included a genealogy reference section in The Inheritance to help people learn how to research their roots.

The word “inheritance” typically conjures up concrete items such as money, jewelry or property and I want readers to broaden their definition of the term to include gender roles, family responsibilities, social expectations, superstitious beliefs and cultural traditions.

I never thought of an inheritance that way, but you are right.

Your book takes place in Calabria, southern Italy. If I were a tourist, what would you recommend I see in this town/country?

The Villa San Michelle in The Inheritance is fictional but The Grand Hotel San Michele does exist. It is a turn-of-the-century family-operated villa situated on a 124-acre estate overlooking the Tyrrhenian Sea on the western coast of Calabria in southern Italy. San Michele is located near the town of Cetraro and I’ve stayed there twice whilst in Calabria researching my books and investigating ancestral roots. I hope you enjoy the photo I took during a recent visit and invite you to explore San Michele at www.sanmichele.it.

Moving on to personal things…if you could time travel to absolute any time and place in history, where and when would you go and what is it that draws you to this time period? What would you do whilst there?

My maternal uncle was an artist and because of him, an early exposure to classical art stirred a lifelong passion and influenced my writing.

Lorenzo, Caterina’s romantic interest in The Inheritance, is an artist. He studies in Florence, marvels the works of Michelangelo and Leonardo da Vinci and has affinity for the Italian Renaissance. The period 1330 to 1550 was a zenith of cultural achievement and the artist-scientist-inventor, Leonardo da Vinci is my favourite figure from this time. Born at Vinci in the region of Tuscany, Leonardo was the child of Caterina, a peasant woman and Piero, a notary who never married. He lived from 1452 to 1519 and I have viewed his paintings in galleries around the world plus paid him homage at the Chapel of Saint-Hubert at Chateau Amboise in central France where he is buried. To quietly observe this genius whilst he lived in Milan, Florence or Rome for even one day would be a profound experience.

What’s the one thing you hope to accomplish before you die? Your main goal?

Family and travel are my priorities and with our 2014 journey to Antarctica, my husband and I have now journeyed to every continent on earth. We are hoping to continue our adventures with a 2015 trip to Iceland. I am a second generation Canadian-Italian and before I die, wish very much to take my adult children to Italy and show them the country of their ancestors.

Antarctica!! Do I sense another novel in the making? That’d be a great setting.

I’m a dog mom, so I always ask this. Do you have pets? If so, tell me about them and do provide pictures.

Mackie napping on my desk

When my children were in elementary school, they decided to rescue a six-week old abandoned black kitten from the local animal shelter. They named him “Mackie” and he developed a yen for low-fat yogurt and figured out how to open doors. After they moved away to attend university, Mackie and I became “best buds.”

I cherish the attached photos. One shows him napping on my sweater at my desk while I am writing on the computer and the other, posing atop a writing magazine on the ottoman positioned in front of my reading chair that we shared. Mackie passed away July 30, 2013 at the age of fifteen and I grieve his loss daily. 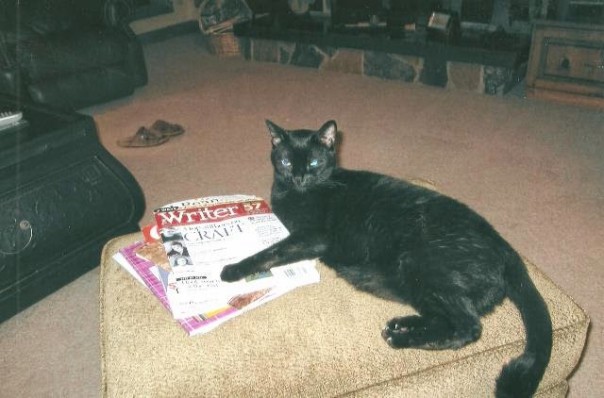 Right now, my husband and I are travelling as much as we can and we do not feel that our itinerant schedule would be fair to a pet. This is the first time, however, that I have been “pet-less” and there is a peculiar loneliness in my life that I find quite distressing. For this reason, I have already picked the name “Otis.” It would suit a dog or cat, I’ve decided, and think a trip to the local animal shelter lurks in the not-too-distant future.

I’m sorry to hear of Mackie’s passing, but it sounds like he lives on in your heart. And 15…he must have been very happy. Thank you for sharing this with us and good luck with The Inheritance and your travels.